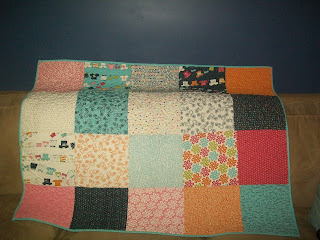 This is my newest creation for a new baby girl named Eliza. She is the newest member of The Advent children.  I had so many grand plans for this quilt. It did not turn out the way that I planned. However, it will still be a great gift. 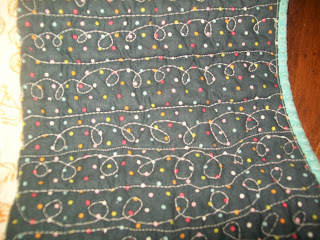 My first thought was to start from the center of the quilt with a spiral, then that changed to various different free motion quilting in each square. This was also my chance to try burying my threads.

So in this first one just a doddle of a design. No name for it. 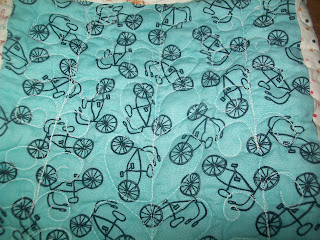 This one was an attempt at vines of some sort. Which is completely impromptu but turned out to my liking. 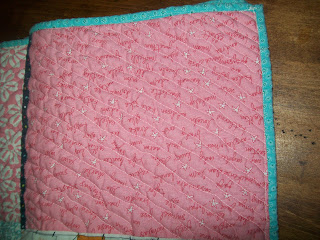 A zigzag was the idea here. Not sure if that was really accomplished. It looks more like lines:/.
I did stippling in some of the squares also. The plan was to leave the last square for her name in the center of an expanding heart.  My machine did not like the thread I wanted to use, which was a
royal blue of I think a 40w thread.


In the end I have concluded that my free motion quilting needs much work and for now I'll be happy with the character that my imperfections add to my quilts.

OH! the burying the thread did not go to well either, but just something else to work on. 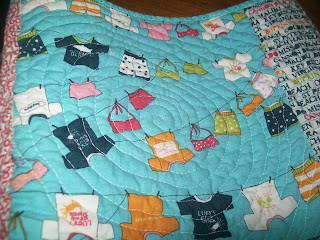 I almost forgot the spiral pic for you guys. Very pleased with my first time attempting it. I've wanted to do it for so long but was scared.
Posted by Shan at 11:46 AM 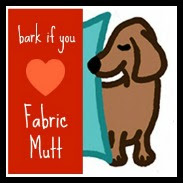